The NCPBM gets set to open its first Regional Branches during the first quarter of 2020, while looking back at its 2019 activities.

NCPBM > News > The NCPBM gets set to open its first Regional Branches during the first quarter of 2020, while looking back at its 2019 activities. 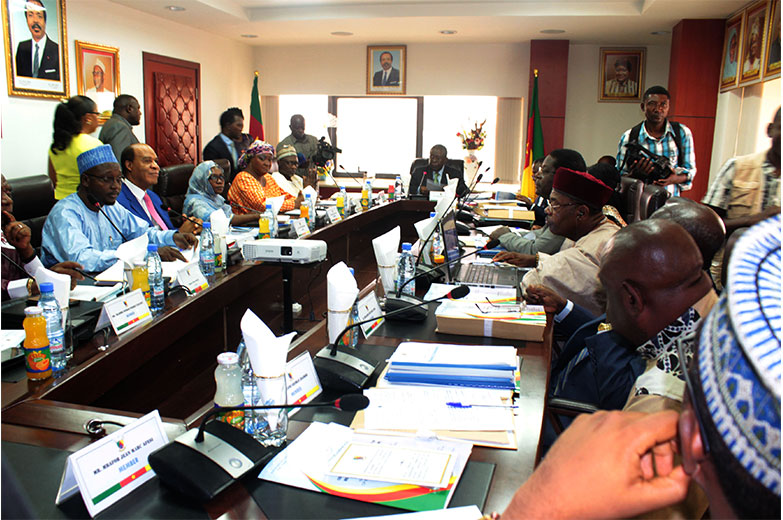 This evaluation and groundwork for the future was made during the second biannual session of the Commission which took place at its headquarters in Yaoundé on the 17th of December 2019.

Opening the one-day session, the President of the NCPBM, Peter MAFANY MUSONGE spoke of an intense year of activities at the Commission.  There was a brainstorming day on Living Together and a colloquium on Multiculturalism, with reports and recommendations on them sent to the President of the Republic. There was also the enriching benchmarking mission to Canada, a media campaign on hate speech and above all the drawing up of the draft bill on official languages in Cameroon, which the government tabled before Parliament.

The NCPBM also co-organised with the UN Centre for Human Rights and Democracy in Central Africa, a capacity building workshop for the Members and the Secretary General of the NCPBM on “the means and strategies to fight discrimination”.

The staff was not left out, as they attended seminars and workshops on administrative drafting, ethics and deontology, computer use and budget management among others.

The Commission also took an active part in the Major National Dialogue, by making major contributions and participating physically. Several audiences were granted to some heads of diplomatic missions based in Yaoundé and to delegations that came visiting Cameroon.

The NCPBM has always nursed the quest to go closer to the people; the reason why it carried out the first phase of missions to identify premises that would host its Regional Branches. In the light the President of the Commission announced that the first Branches will go operational as of January 2020 depending on the available budget. In addition to this, the NCPBM also intends in its 2020 action plan to revive the listen to the people missions in the remaining eight regions, step up follow-up missions on the sound implementation of constitutional provisions on the practice of bilingualism in public entities and formalise collaboration with some civil society organisations.

With these actions in view, the NCPBM hopes to satisfy Cameroonians as far as its missions of promoting Bilingualism, Multiculturalism and Living Together are concerned.